Winter Solstice on the Ranch 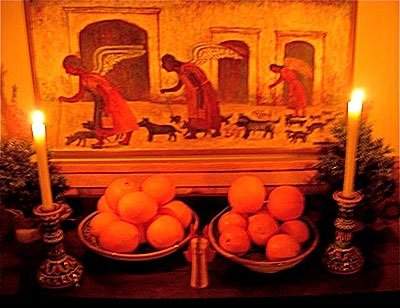 I love winter, the time of candles reflected in darkened window glass, the blazing fire, the Christmas tree covered with faceted, jewel-like ornaments.

Of course at two am when I need them most, the candles are gone, and the unlit tree is a large shadow in the corner.

I still wake at two am, but in the quiet of the mountains, it no longer seems so terrible. I don’t lie in bed dry-eyed, staring at the ceiling, turning over in my mind every failure, every shortcoming. Even the coyotes ululations don’t alarm me as much as city sounds did — the distant sirens, the big rigs down-shifting on Highway 24, the sound of someone rummaging through the garbage on the nights we dragged the bins to the curb, the time I heard a woman sobbing by the side of our house. Her grief — whoever she was — still haunts me.

Now when I wake in the early hours, I just try to fill myself with darkness, with silence. Up until a couple of days ago, I had yet to be completely successful. I only seemed to grasp those things by their opposites, by sound and light. In autumn — the owls. In summer — the frogs in the pond. And last night, after nights and nights of dark rain, the setting moon blazed so brightly through the bedroom window, I was afraid of a fire on the northwest hill.

But there was one moment in the midst of all this, as the rain of a fierce winter storm pummeled the roof and battered the oaks on the hill, where I almost got it. I was awake at two or three in the morning, taking all of it in, when I heard a dull thud. 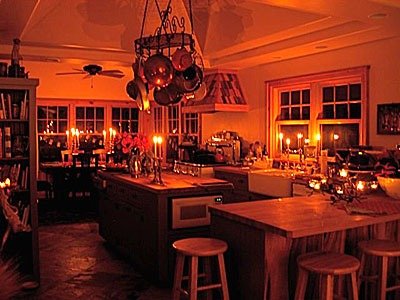 The refrigerator cut off.

Now THAT is silence. That is darkness.

It is also no coffee grinder, no coffee, no toast, no laundry, no Christmas tree lights, no reading the New York Times, no computer, no telephone, no dishwasher. No Kitchen-Aid whirring the butter and sugar, no making the traditional three-layer coconut cake.

So much for metaphoric darkness, spiritual darkness, the wonderful darkness of poems like Theodore Roethke’s “In a dark time, the eye begins to see . . . ”

Folks, it was just plain dark, damp, cold, and boring. Really boring. Poor Dave kept trying to read, but the color of the print blurred with the gloomy color of the room, so he finally gave up.

After thirteen hours of no electricity, we lit every candle in the house, and I tried to rustle up some dinner.

Then, just as the pasta pot was filled, I heard it — the metallic whine of the refrigerator! The power came back on! We had light! 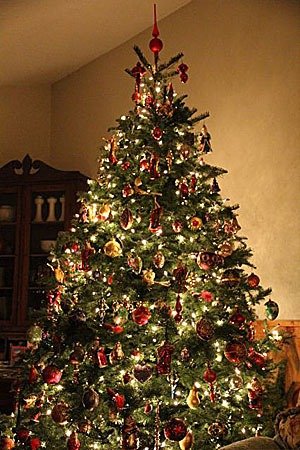 Here’s the pasta I made, destined, I think, to be a Winter Solstice tradition. It’s a traditional Roman dish called . . .

Heat butter and olive oil in large pan until very hot. When pasta is done, drain, saving the cooking water.
Stir the pasta around in the hot oil and butter. Add about a cup of hot pasta water, sprinkle in the cheese and stir until the sauce is creamy. Add more water as needed to make it creamy and smooth. Sprinkle in the pepper, taste for salt and serve. Bring the pepper grinder to the table for those who want more.

There you have it, what I now call Power Outage Pasta.

I should tell you the traditional versions of this recipe use all Pecorino cheese, but I like it a little milder. Besides, Dave just brought back a beautiful wedge of cheese from the Pasta Shop in Market Hall in Oakland, so I had to use it. A nice Umbrian red wine from Vino on College Avenue in Oakland added to the festivities, along with a big bowl of satsumas, pears and some local pecans from Tom and Mary Riffel at the Riffelhof Farm and Vineyard in Miramonte.

Merry Christmas to you all.

7 responses to “Winter Solstice on the Ranch”