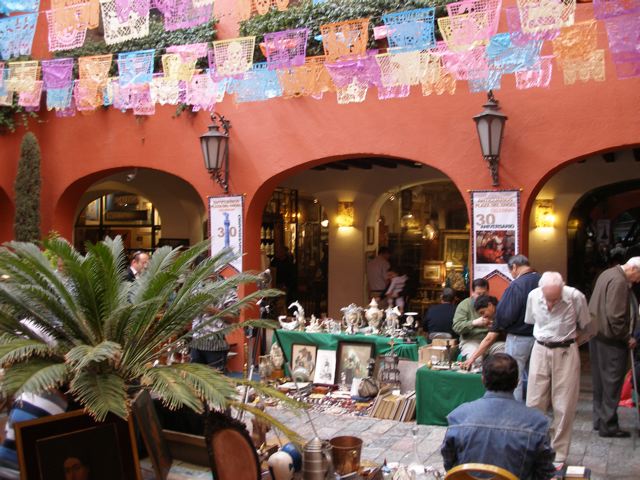 Well, it had to happen sometime. I’m late with the post. First time in almost two years, but I have a good excuse. I embarked on a cleaning-out-all-drawers-and closets rampage, all inspired by a necklace Dave bought me at the Plaza del Angel Antique Market in Mexico City, which you see only a small part of above. Think Marche aux Puces in Paris only in Mexico City and in Spanish.

Anyway, the necklace is so perfect, goes with everything I own, can be worn on any occasion with jeans or a black dress, that I almost don’t need anything else.

Wouldn’t it be wonderful, I thought, if I could pare my life down to only the necessary and the beautiful? It’s something I’d been dying to attempt for a long time. After the sensory overload that was Christmas, January seemed like a great time to start

When Dave decided to go to the Bay Area for three days, I knew it was my big chance to up-end the kitchen and throw out everything I don’t use. No stopping to make dinner. Nothing in the way.

It’s just that it took a lot longer than I thought—hence late blog post— but I reorganized every cabinet in my kitchen. So satisfying!

The next day, I just wandered around opening cabinet doors, gazing at the platters and pans all stacked up, the duplicates stored away or tossed. Bliss.

Then it was onto the bureau drawers. Wow! so much stuff I don’t use. I either have to start sleeping in silk PJs or throw them away. Did I actually have a life once in which silk pajamas were even feasible?

It’s just there was one nagging little problem with my virtuous activity. Part of me knew I was procrastinating. I have to get back to the copy-editing of my novel to get it up on Amazon, but I’ve been a little discouraged lately.

Every time I see an article on Mexico, it’s all about the drug war, the dead bodies dumped on the town square, in the middle of Mexico City, by the side of the road. Just a constant barrage of horrible news.

Why, I started to wonder, would anyone want to read about the place?

Then a funny thing happened as I got rid of old stuff, excess 13 by 9 inch pans and the like, as I pulled the souffle dish back from it’s exile at the far end of the cabinet, as I boxed up jewelry that I haven’t worn in years—those chandelier earrings— to give to my daughter. I felt more confident of my own story, knew that it was in some way truer than the numbers and statistics about the bloodshed.

In fact, Dave I spent a lovely two weeks in Mexico City this November, and here we are alive and well. 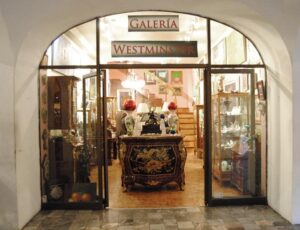 And I scored the silver and amethyst Fred Davis necklace, which was the inspiration for my cleansing frenzy.

After the last post, I decided to create some sort of collage, images I can keep in mind as I move toward my goals. I didn’t know this idea was called a vision board, but, on the same day it seemed, something happened and I learned.

I got an e-mail from an agent letting me know that she was moving to a new agency, one that developed self-published books.

Could have knocked me over with a feather. How times have changed.

I decided to take a look at some of the books this outfit published. Lo and behold, there was a book on How to Create Your Vision Board. Turns out it’s a lot more complicated that just sticking up a bunch of pictures. And the first step? De-cluttering! Which is, I guess, what I was doing.

Anyway, the book was interesting, so I downloaded onto my iPad. I’ll be following some of the steps over the next few weeks.

Anyway, the necklace, when I look at it, is an image of what I know to be true about Mexico… about Americans going to Mexico and becoming artists, about how Mexico nurtures that no matter what else is going on and has for years and years.

Just take a walk on a lovely Saturday afternoon around the Plaza del Angel in the Zona Rosa and you’ll see.