The Cuckoo’s Calling by J.K. Rowling Otherwise Known As the Debut Author . . . (part 2)

(read part 1 of this article)

In April of this year, Mulholland Books, an imprint of Little Brown, published a mystery novel by an unknown author, Robert Galbraith, titled Cuckoo’s Calling. It got some nice reviews, including starred reviews from Publisher’s Weekly, as well as praise from well-known authors in the genre. You know how many copies it sold in three months? 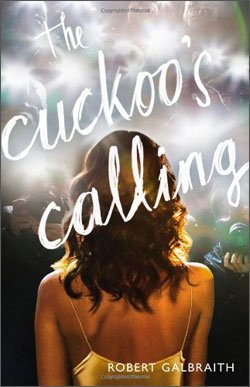 If Robert Galbraith had really been Robert Galbraith, the one with the complete biography at the back of the book detailing his service in the army, his work in civilian security etc. etc., he would never have earned back his advance. It’s fair to say, he might never have been heard of again.

But, Robert Galbraith was as complete a fiction as the book itself. The author, finally outed in an anonymous tweet, was none other than J.K. Rowling. Yes, that J.K. Rowling of Harry Potter fame. I’d also venture to guess that if Robert Galbraith hadn’t really been J.K. Rowling of Harry Potter fame, but rather let’s say, Joe Blow or even Jane Rosenthal, and said writer created such a fictional biography and only sold 500 copies and was outed in the press, there would be enough lawsuits to keep lawyers in business for years. The only thing worse would have been if Oprah had chosen it for an Oprah Book Club selection.

It’s good, too. I’m reading it until wee hours.

I’d even be willing to say that if Robert Galbraith were really the army bloke he was portrayed to be to be with few literary contacts, he would have never gotten published at all. He would have had a manuscript in a box. He might have even turned to self-publishing, as many have.

As I just have.

All I can say is that it has been incredibly liberating to do something people in power said I couldn’t do. One small step for Jane, one giant step for talented, interesting, older women everywhere.

Go to MexicoTrilogy.com and check it out.