A New Yorker Cartoon and a Little Rant 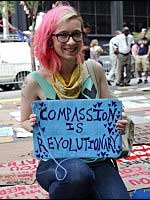 When the Occupy Wall Street kids shout “MAKE ‘EM PAY”, they don’t mean make’ em pay $15 dollars a half-pint for apple butter at Zabars. But those bankers would, because they’re too lazy — I mean, too busy, too busy gambling with your money — to make their own.

For the rest of us mere mortals (the other 99% of us) and for the 1 in 5 residents of New York City who are now living in poverty according to the latest statistics, I offer you my recipe for apple butter. There’s nothing better in the dead of winter than a slice of homemade whole wheat toast slathered with apple butter, eaten at a window while watching the birds cluster around the feeder.

And one last thought, brought to you from New York City, too, from one of those kids occupying Wall street . . .