Kiana Davenport or Self Publisher Beware of The Big Six 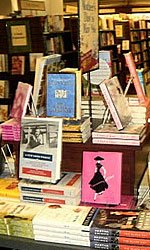 If you’re not a writer, you probably don’t know who the BIG SIX are. Ah, but as readers, you should. Everything on your bookshelves, I’m willing to bet, is published by one of these six media conglomerates. See the books on the table of a B&N? All from Harper Collins.

Sometime in the 90s, a massive consolidation in the publishing industry took place. After the dust from all the mergers settled, writers found themselves staring at the rock face of a publishing El Capitan with very few ways to climb.

First, there’s Hachette, which acquired Time Warner and is part of the French Media Conglomerate Lagardere. Little Brown and Grand Central are two of their imprints.

Moving right long, you’ve got Harper Collins which is part of American News Corp owned by Rupert Murdoch. Murdoch’s empire has about fifty imprints. It might be possible to go for weeks getting all your . . .