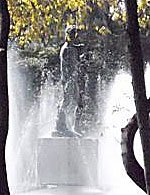 I wanted to walk around Parque Rio de Janeiro— the setting that inspired my novel. After the 1985 earthquake, the buildings around the park, which are so romantic, fell into disrepair. Many were abandoned, and it didn’t take long for Mexico City’s artists, musicians and writers to move in.

I don’t know what it’s like for other writers of women’s fiction, but I didn’t make a conscious decision to write about the two expat sisters—Vivienne and Lili— who inhabit a house on this park. They just came to me, like new friends do—and I spent the rest of the time trying to get to know them—their passions, their rivalries, their secrets. Finally, the whole draft came together and the title —Palace of the Blue Butterfly— as well. I have no, I mean it, no idea how I got the title. It just flew into my head . . .