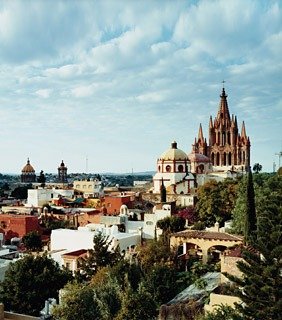 I went to Mexico for three days last week to attend the memorial service for George Miller, the photographer I’ve written about. It was a beautiful ceremony, and the church was packed, not a dry eye in the crowd. He was much loved by the expatriate crowd.

On the way down, I sat next to a lovely woman who was on her way to spend a month in San Miguel del Allende—something I’ve always wanted to do. Sometimes I look up the wonderful houses you can rent there through VRBO. Just take a look!

“Did all your friends freak out that you were going to Mexico?” I asked. “Did they tell you how dangerous . . .

Anyway, as you all know, one of my goals for the year is to self-publish my book. I’m going to put Palace of the Blue Butterfly up on my website as a free audio book for you. My progress so far? Episode one is recorded and edited. With all the other chores around here, the first episode took about a week to complete. I made a recording of the first chapter, but when I played it back, there was too much echo. (Ah, the old NPR days came back to me.) Still, I practiced editing on Garageband. Woo-hoo. Garageband! ME! . . .

Oaxaca: A Celebration with New Friends

I looked out of my window as we approached Mexico City and framed there, I saw Iztaccihuatl and Popocatepetl, gleaming white in the brilliant blue sky. The pilot turned in a wide arc and flew us straight down Avenida Reforma, past Chapultepec Castle, right above the Monument to the Revolution. I could even see the gold wings of the Angle of Independence as we flew above it. Dave and I arrived in Oaxaca at twilight, the beautiful . . .

Mexico: Through the Eyes of George Miller

Today I am mourning the loss of George Miller, a man I met on the internet.

Used to be, when we first moved up to the Ranch, Dave would go to the Bay Area to work three or four days a week. Sometimes, when the nights were long, I would browse around on the internet . . .

It’s New Year’s, and I’ve been thinking about all I want to do, should do, have to do. I threw out the shoulds and the haves right off the bat. This year will be all about JOY. First thing I want to do is follow the steps in Julia Cameron’s The Artist’s Way. A friend of mine gave me the book a long time ago. I was living in Berkeley then, and I went down to Amsterdam Art on University Avenue and made myself a little box of watercolors and glitter and lovely paper. When we moved up here . . .

Winter Solstice on the Ranch

There you have it, what I now call Power Outage Pasta.

I should tell you the traditional versions of this recipe use all Pecorino cheese, but I like it a little milder. Besides, Dave just brought back a beautiful wedge of cheese from the Pasta Shop in Market Hall in Oakland, so I had to use it. A nice Umbrian red wine from Vino on College Avenue in Oakland added to the festivities, along with a big bowl of satsumas. pears and some local pecans . . .

I wanted to walk around Parque Rio de Janeiro— the setting that inspired my novel. After the 1985 earthquake, the buildings around the park, which are so romantic, fell into disrepair. Many were abandoned, and it didn’t take long for Mexico City’s artists, musicians and writers to move in.

I don’t know what it’s like for other writers of women’s fiction, but I didn’t make a conscious decision to write about the two expat sisters—Vivienne and Lili— who inhabit a house on this park. They just came to me, like new friends do—and I spent the rest of the time trying to get to know them—their passions, their rivalries, their secrets. Finally, the whole draft came together and the title —Palace of the Blue Butterfly— as well. I have no, I mean it, no idea how I got the title. It just flew into my head . . . 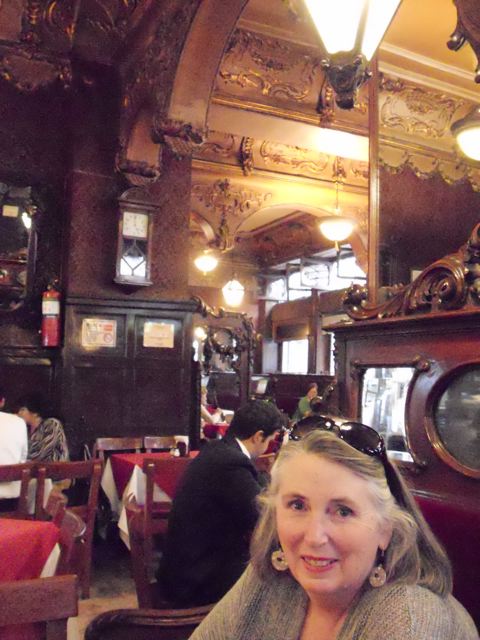 Whenever I get a hankering for a bit of glitz and glam, I head to the city . . . the really big city, the biggest city in the world . . . Mexico City.

I suppose everyone, and especially at my age, has a few threads left unwoven into the fabric of his or her life. Mine is Mexico City. It was a love affair that started on a road trip when I was seventeen and has pretty much continued. And while I love life up here on the ranch, I really did want to get out my fancy clothes, paint my nails, put on the Chanel red lipstick and be all urban and sophisticated and stuff. So . . . a week before Thanksgiving, Dave and I headed down Mexico way to visit friends, hang out in cafes, wander around galleries and museums and generally soak up comaraderie, culture, and haute cuisine Mexico City style for a week.

We got a little snow for our Thanksgiving guests from San Francisco, which was a thrill. But now the guests have departed, and I’m left here on the ranch in the quiet stillness of frost and fallen leaves. Friends’ absences or not, there’s always something quiet and still about this time of year— that lull between holiday celebrations. It’s when I feel the season most intensely.

This morning, standing on the porch, coffee cup in hand, just as the sun came up over the hills, I watched the mist . . .

A Southern Thanksgiving on a Western Ranch

You noticed. Yes, that’s a turkey in my kitchen. I have a few exceptions to the vegetarian rule and Family Holiday Dinners is one. Any veering from tradition on this one would break my husband’s heart.

The picture’s a little blurry, but that’s what Champagne and candlelight does, I guess.

Hope your holiday is as full of warmth and high spirits!