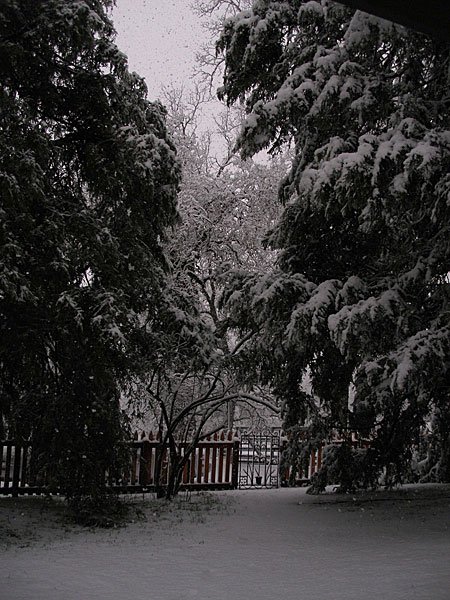 I’ve had a bit of writer’s block — too much to write about, not too little — so I’m a bit late putting this up.

This past week, I would be all set to write about one thing that was going on around here when something else would snag my attention, and off I’d head in that direction.

Today, since I was down to the wire, I just decided I’d go with whatever thought I seemed to light upon the moment I sat down at the computer.

Coffee cup in hand, I clicked on the San Francisco Chronicle first to get the weather report. We are longing for rain, snow, mist, fog, anything at all resembling precipitation. We’re in the midst of a strong La Nina out here, which means cold and dry. Boy, is it dry.

However, in my ADD mode, a headline grabbed my attention away from the weather report. “Neighbors Up In Arms Due To Heinous Noise from Hospital” it read.

Dear God, I thought, thankyou thankyou thankyou that I don’t have to go through that anymore. San Francisco may be a beautiful city, but the thought of living next to a massive, humming air filter system that sounds like a giant leaf blower and makes using your backyard impossible is enough to turn my blood cold.

And at just the moment I was mumbling my little prayer of gratitude, I remembered a poem by Mary Oliver, who seems to be an insomiac like me. About that she writes: “Not quite 4 a.m., when the rapture of being alive/strikes me from sleep,”

A good way to deal with insomnia, I’d say.

Besides, It’s so much easier to feel that way when not woken by a giant, humming, hospital air- conditioner, or whatever it is, that has a tendency to kick in at 3 am in the morning. Again — thankyouthankyouthankyou.

For me, this poem captured everything that was going through my mind — the longing for snow, the lovely sound of the owls when I wake in the middle of the night, and the excitement, tinged with, if not dread, certainly concern for the coming year.

And also the poem gave me the comfort of knowing that, no matter what happens in 2012, La Nina will turn again into El Nino, and I will once again be able to hold my hand out to the glittering snow or the cold rain.

And you will, too.

Here’s a poem to welcome in the coming year. 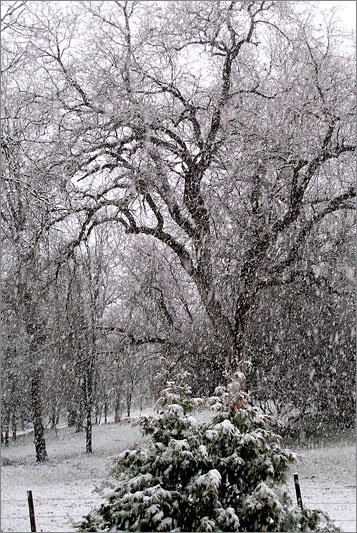 Last night an owl
in the blue dark
tossed
an indeterminate number
of carefully shaped sounds into
the world, in which,
a quarter of a mile away, I happened
to be standing.
I couldn’t tell
which one it was —
the barred or the great-horned
ship of the air —
it was that distant. But, anyway,
aren’t there moments
that are better than knowing something, and sweeter? Snow was falling,
so much like stars
filling the dark trees
that one could easily imagine
its reason for being was nothing more
than prettiness. I suppose
if this were someone else’s story
they would have insisted on knowing
whatever was knowable — would have hurried
over the fields
to name it — the owl, I mean.
But it’s mine, this poem of the night,
and I just stood there, listening and holding out
my hands to the soft glitter
falling through the air. I love this world
but not for its answers.
And I wish good luck to the owl,
whatever its name —
and I wish great welcome to the snow,
whatever its severe and comfortless
and beautiful meaning.